Happy New Year All.  This is my first proper post, taking over from the Late Lamented Lotterington, and I have loads to report!  Since the last post (!) we have been filling tyres with gravel every weekend.  Throughout November and December, we worked every weekend and by Christmas had completed the tyre foundations for five of the twelve walls needed.

This involved lots of barrowing of gravel from the yard to the site, because the quarry truck couldn’t reverse up the slope in the mud!  The short days meant that several times we were still working in the dark, helped by Claire and Thom (Katie’s brother and his girlfriend).  The underside of the roof looked decidedly seasonal though.

In the run-up to the festive season, Chris and I made use of my holiday, and started to excavate more of the foundation trenches, and shift the soil and rubbish excavated to the back of the site, to start filling in part of the old railway line for our driveway.  By the time we were forced to retreat indoors by weather and the prospect of overeating, we had completed all of the foundations for the north wall, and filled in around half the driveway.

Whilst all this frantic activity was going on, I also found time to finalise the water supply trench, which we dug back in October.  This entailed finishing laying sand on the bottom (started way back by Dave (& Spencer) and my Dad), and then putting in the water pipe itself.  This was the hugely expensive ‘barrier pipe’ required since it was to run through old domestic rubbish.  Then, the house end was connected to a non-return valve and stop tap.  The house supply will be connected up properly when the walls have been completed. 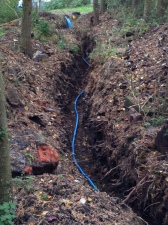 After the mince pies and chocolates had taken their toll, we resumed on site the day after boxing day. We took delivery of another hire mini-digger, this time from Hire Station in Melton.  We had this for 4 days, and made good use of it, completing the remaining trenches for wall foundations, and starting to sort through the enormous pile of brick rubble that remained from the old Victorian railway bridge, dismantled a few years ago.  This pile yielded another large amount of usable blue bricks, set aside for cleaning in the spring, and a large quantity of hard-core to augment the soil already shifted to the new driveway.  The last act of the digger hire was to level out the hard-core on the half of the driveway nearing completion. 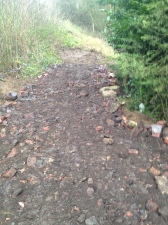 Whilst Chris and I were doing this, the lovely Wardales came over, complete with dog pack (three constitutes a pack doesn’t it?), and filled in the last of the soil over the water pipe, to allow it to be connected up to the mains.  The water board had earlier declared themselves satisfied with the pipe setting and fittings.  One shovel (not tough enough to survive the frenzied assault) and two rats (not tough enough to survive the violent shaking by Bramble and Nugget, the border terriers) later, the trench was restored to some semblance of its original state.

Archie (my nephew) escaped from the post-Christmas uproar at home and helped me with the last straightening and tidying of the new trenches, which sounds simple, but actually involved a lot of manual shovelling of clay and rocks from the bottom of the  3 foot deep trenches – still, its good for him, and better than being terrorised by his younger siblings!

The last act of this saga was completed after new year, when the water board connected up their end of the water pipe to the mains in the middle of the road into the village.  So we are now the proud owners of a water meter chamber, though not a water meter yet apparently!  We were also the cause of a slightly disrupted first commute of the new year for some as we necessitated the use of traffic lights on the road through the village.  I enjoyed this as I was still on holiday! 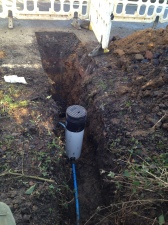 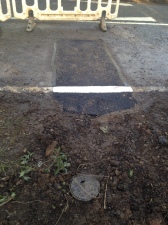 And I must add a huge vote of thanks and hugs to John Dimmick and my brother Jim, for their continued hard work in gathering tyres from all over west Leicestershire and delivering them to the farm, so that we could get on with work on the foundations.  Nuff ‘spect Gents!

I'm a conservation scientist, working in UK, European and African habitat conservation with NGOs and academic institutions. I am interested in the impacts of land use on conservation and ecosystem services. My wife and I are building a new house, paying particular attention to the resources used in both its construction and daily running. Follow our progress on this blog as we attempt to marry up resource protection, conservation and sound construction.....